In November 2016, a SUSTAIN Dutch delegation visited the conference Gerontological Society of America Annual Scientific Meeting to spread the word about the SUSTAIN project and to connect with other researchers and policy makers in the field of the ageing society.

On November 16-20, 2016, the Gerontological Society of America held their Annual Scientific Meeting. This year, the meeting was held in New Orleans, Louisiana. Located on the banks of the Mississippi river, New Orleans is a major United States port and famous for its cuisine, music and festivals.

The theme of this year’s meeting was ‘New lens on aging: changing 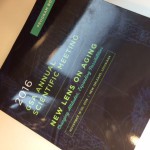 attitudes, expanding possibilities’. A Dutch delegation, consisting of Simone de Bruin (RIVM), Manon Lette (VUmc) and Annerieke Stoop (RIVM/VUmc), visited the conference to spread the word about the SUSTAIN project, as well as to connect with other researchers and policy makers in the field of the ageing society. In this conference report, we will first describe several interesting topics that were highlighted during the conference, after which we will conclude with a short discussion on how SUSTAIN was received.

In line with its theme, the conference highlighted several interesting views on aging and aging research. As also highlighted during the conference’s Opening Plenary Session by journalist and writer David Bornstein, an important message during the conference was to focus on the value of older people to society. Mr. Bornstein advocated to rethink the artificial line, set at age 65 already many years ago, between when one is considered an asset versus a liability to society. He argues that everyone can be of value to society, as long as opportunities for this are created, and he urges for communities to take up their role in this. This was underlined in different sessions during the conference. For example, several sessions focused on the importance of both people’s social and physical environment for participating in the community and healthy ageing. In the session on Environment and Health, Caitlin Coyle from the University of Massachusetts in Boston discussed recommendations for ageing in place based on interviews with older people involved in the initiative ‘Age-Friendly Boston’. In addition, a study presented by Dr. Christine Mair from the University of Maryland, Baltimore County showed that neighborhood environment is linked to social support exchanges (receiving and providing emotional and instrumental support) between their inhabitants. The importance of sense of purpose and 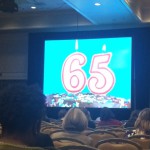 reciprocity was highlighted in different presentations during a session on Social Support, as well as during a session about Green Care farming that was chaired by Simone de Bruin. Together with colleagues from Maastricht University and University of Montana, she presented work about how these elements are incorporated in care for people with dementia in the Netherlands. Central in the session were the value of green care farms for people with dementia and which lessons can be learned from this innovation in dementia care.

Another notable topic during the conference was the so-called ‘culture change’ in care for older people towards more person-centered and person-directed care. Different sessions highlighted the importance of interdisciplinary commitment to achieve this, through involvement of health care professionals, community partners AND older people themselves. Other important aspects to achieving and sustaining culture change were related to competence development and training of staff, advances in the measurement of care preferences and person-centered outcomes, and funding of implementation and implementation research. A session on person-directed care, provided by Dr. Kirsten Corazzini from Duke School of Nursing and Dr. Michael Lepore from RTI International, explained key adaptive leadership challenges and barriers to achieving person-directed care. In addition, they addressed some experiences with the interdisciplinary approach. Experiences with interdisciplinary commitment were also highlighted in a session on community integrated health care, provided by the National Council on Aging. This session provided insight into resources and best practices already available, e.g. with regard to community engagement, building partnerships between health and social care and building business cases. The discussant of this session, Rob Schreiber MD, advocated that social care needs to learn how to think like and engage with health care, as he stated that ‘health care is often where the money is’. But also the other way around, as health care should better understand the value and importance of social care. Rob Schreiber was interested to learn about the SUSTAIN project and contacted us after the conference to discuss how his and our work could be linked and what would be the best way to build on each other’s knowledge.

A discussion on measurement of the effects of culture change and integration of care also came forward in several sessions. Dr. Kimberly van Haitsma from Pennsylvania State University, who was discussant during a session on ‘Integrating implementation into intervention research in long-term care’, stated that the effects of culture change in care are often measured on clinical level. In other words, we measure if person-centered care has any effects on the clinical outcomes of older people. However, Dr. van Haitsma argues that the goal of implementing

culture change was never to improve clinical outcomes, but to improve quality of life. In addition, she advocates that other effects, such as changes in perceptions and processes, may be seen as valuable outcomes as well, even if there are no effects on clinical level. In this respect, Dr. Kezia Scales from Duke School of Nursing addressed how qualitative methods may contribute. She highlighted how voices of experience may address policy issues and how qualitative methods could shed light on implementation issues and different stakeholders’ roles and perspectives on this.

We were very excited to see that implementation research was also a topic of interest during the conference. Several sessions highlighted the gap between research and policy and practice. Many evidence-based interventions exist, but according to Dr. van Haitsma the uptake of these interventions may be as low as 10%. Dr. Martina Roes addressed the implementation error and argued that we should not wait with thinking about the implementation of an intervention until we have evidence for its effectiveness. She stated that rather than separating the implementation from the effect, both should be evaluated together to gain insight into what happened during implementation and how that could explain results. Dr. Hilde Verbeek provided a nice example of how implementation and intervention research are integrated in their ‘Living lab’ in the Netherlands, and Dr. Ivan Molton provided an example of adaptation of evidence based programs as a translational research strategy for people aging with disabilities. In the session on ‘Research and policies to increase evidence-based programs in community settings’, Dr. Lisa Onken presented the STAGE model to re-conceptualize intervention development. She argues that rather than only looking at efficacy and effectiveness, implementation ability should already be included in intervention development from the start. She does emphasize that knowledge of the mechanism of action and evidence for its effectiveness is crucial, as it is the only way to be able to know how to implement an intervention with fidelity and where

deviations and adaptations are possible. Dr. Laura Gitlin presented an example of an intervention development timeline, showing it can take no less than 22 years before one can start
disseminating and scaling up an intervention. She argues that the translational phase takes a lot of time and money, but is often not funded. In addition, it takes a different way of doing science (collaborative efforts, team science) and many approaches and lessons learned are not published because they do not fit the current publication rules. In short, this topic very much affirmed the importance of the SUSTAIN project. 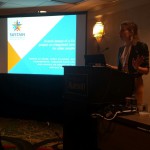 The session on the SUSTAIN project was scheduled on the final day of the conference. Simone de Bruin, Manon Lette and Annerieke Stoop respectively discussed the overall design of this European project on integrated care, early experiences with improving integrated care in the Netherlands and the characteristics and current performance of fourteen integrated care initiatives participating in the SUSTAIN project. The session on the project was well received and
elicited interesting discussions. Our discussant, Dr. Sandra Zwakhalen from Maastricht University, noted that our participatory approach is indeed an excellent way to solve 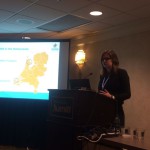 current implementation issues. Nonetheless, both she and the other participants also provided us some interesting points to explore further. As Dr. Zwakhalen sees it, one of the biggest challenges for the project will be showing the effectiveness of integrated care, as the only right for sustainability of an intervention would be its effectiveness. As described above, this conference provided additional food for thought as to what could be considered to be ‘effect’ and how this should be measured. Furthermore, we talked about the core domains of SUSTAIN and how they could be potentially conflicting. In some cases for example, people’s preferences may not be in line with the core domains of prevention and safety, and it would be interesting to look in to how we can balance these core domains. We further discussed the importance of 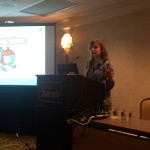 balancing our roles as researchers with our roles as ‘consultants’. SUSTAIN partners are in several sites currently the moving forces of the improvement projects. We need to keep in mind, however, that we are interested to evaluate the experiences of different local stakeholders and processes and underlying local mechanisms, rather than ourselves. Finally, the audience indicated to find it challenging to make meaningful comparisons between the different SUSTAIN sites, since they are so different in terms of stakeholders involved, targeted populations etc. We discussed, that although the sites are different, the issues they encounter are rather similar.

Altogether, we experienced our attendance to this conference as very valuable and informative; it provided us the chance to internationally introduce the SUSTAIN project, meet interesting people and attend several inspiring sessions.